Bridgnorth Tae Kwon-Do’s national GTI squad members, Dean Lewis and Luke Richardson, have been busy at their second World Championship in a fortnight!

The pair attended the UITF World Championships in London on the weekend of the 10th July. Dean, still carrying an injury from the highly successful  competition in Rimini, fought well but missed out on a place on the podium.

Luke was involved in a three-way tie for silver for patterns in a category of around 25 black belt students; and placed fourth after three nail biting tie breakers. However he is coming home with a bronze medal due to his indomitable sparring style. He has gained the nickname ‘Lionheart’ from his Squad peers and this is why! Luke constantly pushes forward, striving to improve. We are really pleased that he has a World Championship medal for an individual category. Another one for the collection!

Well done Dean and Luke, from everyone at Bridgnorth Tae Kwon-Do! 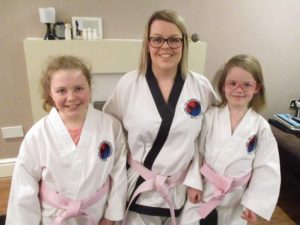