Our very deserving winner of the Student of the Year 2020/21 award is Jack! Jack has been plugging away at his training, and has continued through periods where he has felt like he’d rather be on his X-Box!

We have been particularly impressed by Jack’s attitude in the run up to the black belt grading. Firstly, he has never pushed for a faster pace with his grading schedule despite a couple of times where he felt ready and Mr Plant wanted slightly more. Secondly, the prep for the grading and the grading itself have revealed a reinvigorated version of young Jack! Thirdly, and this is said with pride, Jack has maintained that effort. He hasn’t viewed the 1st Dan promotion as the end goal, but a doorway to better things, and we applaud him for that! Jack does have a feisty side as we have seen in his sparring! But he is an impeccably polite and well-liked student who thoroughly deserves this recognition. 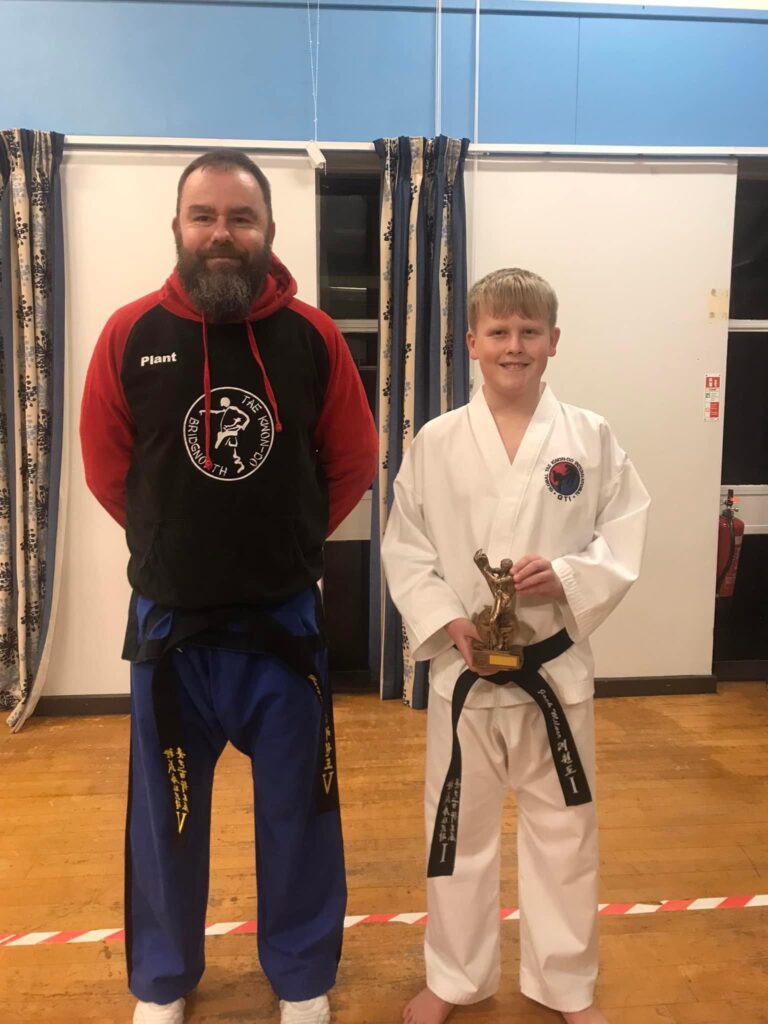 We are delighted to name Marcin our senior Student of the Year 2019. He gives 100% every lesson and is hungry to learn, keen to improve. He pushes himself to achieve his very best and asks questions to aid his understanding where he feels he can do better. Marcin has become the World Champion this year and just passed his red belt grading with a ‘plus’. His power and enthusiasm is clear for all to see, although admittedly he is still working on self control…! Congratulations Marcin you deserve it and we are sorry to see you leave as your work commitments change. All the best.

Cain is named our junior Student of the Year 2019 because he has acted out all of the tenets of taekwondo this year. Just 5 at the time, he welcomed new students and was keen to show them what to do to make them feel part of the group. Having only sparred against his big brother a few times (who has age and height to his significant advantage) when Cain first sparred another junior student he demonstrated superb self control and kindness. Cain had a little setback earlier in the year, but he has persevered with a fun and happy attitude to gain his yellow belt today. Cain is an absolute delight to have in the class and is a very worthy winner. Well done Cain! 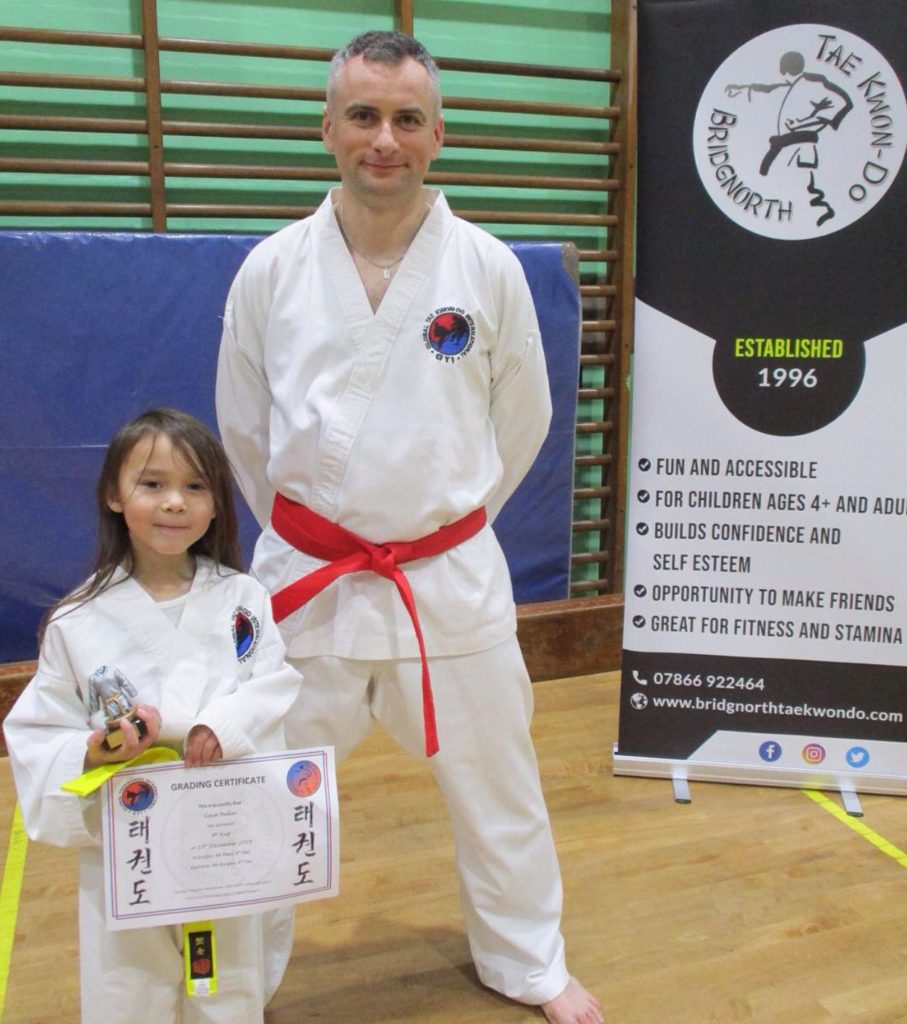 Tom Hardwidge has won the award for his flawless attitude and his enviable grading scores. Tom has impressed us from day one with his hunger to learn, ability to take advice on board and to then apply it effectively. Tom has the best grading scores in the club for 2018 and is a thoroughly deserving winner! Apparently this is his first ever award so we are pleased it will have pride of place!

Jack is our junior winner, and has been named Student of the Year because of his character. Jack has seen a few of his best mates come and go from the club, but has persisted anyway and works well with others. His attendance is almost 100% and his manners are excellent. Most of all Jack gets the award because he battles with his nerves before the gradings, but is really blossoming into a more confident martial artist and seems to be beginning to believe in what we see in him. Jack is one to watch with lots of potential ahead and is becoming a very consistent student.

Well done to you both!

We presented Mr Murr with the senior Student of the Year Award 2017! We chose Mr Murr due to the fact that he truly lives by the tenets of taekwondo – courtesy, integrity, perseverence, self control, indomitable spirit. He is incredibly loyal and keen to help. He welcomes new students with patience and advice. Not only our most senior student at 3rd Dan, Chris is also an umpire and a qualified instructor. Best of all was Chris’ reaction: “I wasn’t expecting that!” which essentially sums up why we wanted to reward him. Congratulations!

Congratulations to Jack, our junior Student of the Year 2017. Jack joined our club a couple of years ago as a very enthusiastic and excitable white belt; although he’d had a little bit of martial arts training at another after school club. With each belt Jack has become more focused, more refined, more controlled and during 2017 everything seems to have clicked into place with Jack’s training. He has attended our seminars, GTI Squad Training, and competed too. Seeing the standard of peers at his first competition at yellow stripe really spurred Jack on to use more power and he’s brought this back to his training in class. Jack is very keen to help others and thoroughly deserves not only his Student of the Year award but also his promotion to red stripe. Congratulations Jack…you’re on the right path!

Oliver Hilton is our senior Student of the Year 2016. With an enviable hat-trick of A-grade colour belt grading passes, Oliver’s hard work is shining through. He undoubtedly has the longest legs in the club but isn’t necessarily the most confident. He therefore asks when he needs help, trains hard and listens well. Oliver trains regularly and attends GTI Squad training for extra practice and fitness. This has paid dividends with Oliver earning himself 1 gold and 4 silver medals. Not only is he storming through the grading and competitive side of TKD, we have also noticed what a supportive character Oliver has, especially when encouraging peers and juniors. We name Oliver our very deserving winner of the title Student of the Year 2016!

What we don’t tell you about our Student of the Year is who ‘almost’ won the award. Harry has impressed us because he has maintained an excellent, consistent level of training even though he had no idea he was our second choice Student of the Year 2013, 2014 and 2015. Harry has taken constructive criticism on board and used it to improve his techniques. He’s continued to plug away at his training with the same commitment even when his grading schedule has slowed down as he approached (and gained) senior grades. And even when we know from his parents that he’s had little wobbles in his confidence behind the scenes. Thanks to Harry, Rachel and James for respecting our decisions and advice, we are extremely pleased with the kind of student Harry has become. To reward excellent attitude and performance we therefore name Harry our junior Student of the Year 2016!

Dave has impressed us from day one with his attitude, hunger to learn and willingness to help others (especially the kids, who like to attack him). He’s also a gold medal winner and has been given an overall ‘A’ and a ‘good’ for his grading scores.

Jake has always been a good student but he has really stepped it up during 2015 – achieving his 2nd Dan, starting competitions at black belt (now that’s daunting!) and winning them too. He’s part of the GTI squad and was selected for Budapest 2016.

Both Dave and Jake were surprised to win, which is what we expected!

Dean has made the most impressive comeback to Tae Kwon-Do during 2014 after a 20 year gap. His dedication is second to none, he is always keen to help and support other club members too. He is a GTI Squad Member, National Champion (a few times over!) as well as being a newly promoted black stripe!

Dylan is our most improved student, having overcome a grading setback this year – a difficult thing to cope with at a young age. Dylan never missed a lesson, just cracked on with improving himself and is reaping the benefits with a brand new attitude. He has taken part in his first national competition in 2014, has just been promoted to red belt and we are extremely proud of his progress.

Rob was awarded Student of the Year on the basis of his attitude. He is extremely tough on himself with high standards and expectations. This paid off with Rob being awarded the best grading scores of the club during 2013.

Luke stepped his training up during 2013 and blossomed into an extremely focused student, being a pleasure to teach. He became hungry to learn and to better himself. He was one of our first competitors and led the way for other club members to compete too.