The day kicked off with patterns as usual and our students battled against their nerves to perform well under pressure. The categories were all very large today but Tammy managed to come away with a bronze medal! Everyone has room for improvement of course and we will continue to work on rhythm, speed, power and stances to perfect the techniques.

Jack was competing for only the second time and was keen to improve his marks next time round, critiquing his own pattern and seeking advice. Well done Jack for your brilliant attitude!

On to the sparring, both Dave and Oliver bagged gold medals. That’s four in a row for Dave now! The fights were extremely tough and intense. Dave did particularly well at avoiding his partners’ attacks whilst showing his fitness to land some excellent points. Oliver lost a few points for loss of balance but only because he loves landing a good head kick!

Harry showed good spirit during his point-stop sparring and was level-pegging for a while but unfortunately didn’t come away with a medal this time. Charlie entered the National Open as his competitive debut but did not look out of place at all. He scored 3 points during his first fight – for a head kick – and chose to use a reverse turning kick! Charlie only lost his first fight by one point and looked even stronger in his second. He came away very motivated to compete again.

Dylan performed a strong version of Choong Moo and was last of our team to fight. He looked hungry to win, attacking from the very start, and used some excellent techniques to earn a silver medal!

Well done to everyone who competed. It’s not all about medals, it’s about improving, growing as a person and as a martial arts student. We are really proud of all of you. Thanks for representing us and being a part of Bridgnorth Tae Kwon-Do! 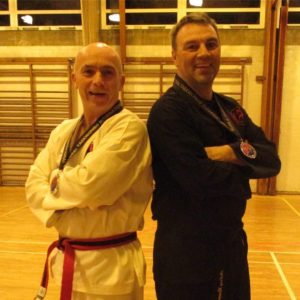 Kicking the year off! 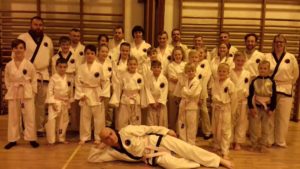 Learning from the best