Dylan and his father David are not embarrassed to admit that Dylan had a setback along the way, having to retake a colour belt grading. Where others may have become disheartened, Dylan put his pride aside and knuckled down to become a better student. Since that day Dylan has seemed like a different child: very focused and keen to learn. We know that David has constantly supported Dylan at home and he allowed us to guide the young student through his setback and onwards. It was largely because of this transformation that Dylan was named Student of the Year in 2014.

At the grading Dylan was calm and composed; bursting with all the theory he had obviously been working hard on. His line work was excellent and Dylan is already planning when he can go for his 2nd Dan.

Well done Dylan, we are extremely proud of you! 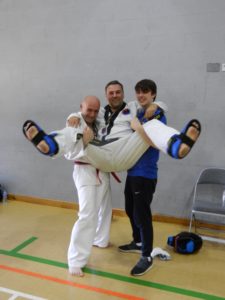